I really think so! Who else agrees? Replies to This Discussion

You gotta figure if they go through all that trouble then they weren't gonna buy it anyway. 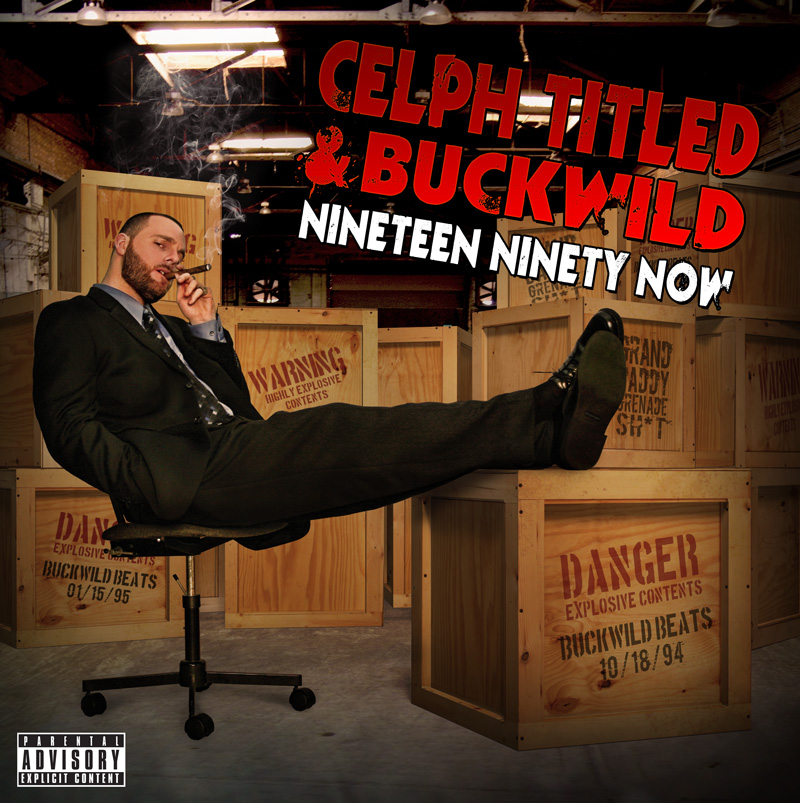 Permalink Reply by Marcus on November 11, 2010 at 9:00am
true dat.
I think i might go torrent some people viruses named "nineteen ninety now".

Permalink Reply by Celph Titled on November 11, 2010 at 4:49pm
thanks for supporting, marcus.

the youtube links don't bother me as much. i feel like i get decent promotion from people stumbling onto my music by being on youtube. the quality in my opinion sounds so shitty that anyone that wants to go thru the trouble to convert the files and rip the audio from youtube, only to end up with a shitty bitrate overly compressed flat sounding MPEG of an MPEG version of the song, then they deserve to just have that. couldve save a lot of trouble just buying it on amazon for 7 bucks. so like others said, that person would never buy it anyway if they're goin thru the youtube process to get the music.

Permalink Reply by Heavenly Divine on November 11, 2010 at 10:34am
Got to try and adapt to the times brother. In the internet age its no good just selling shit unless you're on a major all over TV and radio. Offer all your shit for free download on your website, sign up to an affiliate network and force visitors to fill out an email submit offer to get the download. Payout is about 1.50 - 2 $ for an average email submit.

Example; "To Download The Gatalog please support me by filling out a short e-mail submit offer. After submitting your email the download will start automatically" ... That's just some off the wall shit. And the user would click the offer, type his email and hit 'submit' for some dumb offer about winning an ipad(nobody ever wins though and most people put in fake emails, but who cares?)

Lets imageine you had 250 downloads a day, that'd turn over 500$. 132k a year. Not that far out, if you approach the marketing side of things right. Just need to drive some traffic to your website. You could try it with your older material on the fly first. I don't imagine you shift much units of your old shit anyway? So wouldn't really be profit lost. If you had a few thousand people a day visiting your website(trust me, not difficult bro, just need to offer fans an incentive to get on here) you could easy make guap. One way that could make good money is that instead of spreading links to megaupload, sendspace etc, pirates will be spreading your own link around the internet. Instead of the big upload/download networks making your profit, you'd be taking it.

Another spin off on that would be to employ some sort of internet team. As opposed to a street team. Who go around hip hop forums posting said link. You'd see major traffic to your website and you should see big dollars from it.

Truth is nobody but true fans are going to go out and buy a hard copy. And nobody is paying $7 for a download in todays day and age. Unless you're creative with it you're gonna get fucked as an indie artist.

And don't, whatever these guys tell you, remove your shit from Youtube. That's free marketing right there. What you need to do is leverage your videos to work to your benefit. So contact people uploading your shit, ask them to put your website in the title. If you did what I mentioned earlier with offering downloads you could tell them to put a page link to download your albums. These guys uploading shit are still fans, they'll be shocked to be approached by you and will say yes every time to putting your website details all over the video title and info box.

I'm gonna stop but if you ever need some marketing ideas hit me up on thegfxkitchen@googlemail.com. I've got a ton of good throw away ideas that pros impliment, and you wouldn't need to hire a team or nothing.

Permalink Reply by eDaPS on November 11, 2010 at 10:47am
"Another spin off on that would be to employ some sort of internet team. As opposed to a street team. Who go around hip hop forums posting said link. You'd see major traffic to your website and you should see big dollars from it."

I'm all for being a part of this, Celph. Just puttin it out there, lol.

Also, those are some fantastic ideas, Chris. But I just want to point out that you should never forget the true fans. They will be the one's who will ALWAYS support you.

And as a true fan, download only albums annoy the hell out of me. I like to have the physical copy. Just IMO, though.

Permalink Reply by Heavenly Divine on November 11, 2010 at 11:00am
Thanks eDaPS. Though I wasn't saying not to sell physicals. But that offering the download link on the website aswell could see some big bucks.

Even if Celph just did it for older albums, it should make him atleast 200$ a day. 100 downloads a day is very very achievable.

Permalink Reply by Gonzo2814 on November 11, 2010 at 11:17am
That's what I was wondering right there. I'd def. shell out the dough for a download but best believe I still want the hard copy. Buying an album that included the digital DL would be dope. This way you put your album away and can listen to the DL until your heart's content

Permalink Reply by Marcus on November 11, 2010 at 2:35pm
To be honest im sure Celph has thought of this kinda shit before...
Hes not new to the rap game so he will know all this already.

Permalink Reply by Heavenly Divine on November 11, 2010 at 2:56pm
Celph isn't an internet marketer so I doubt he knows much about e-mail submits or content locking gateways.

There's a massive difference between thinking about something and actually knowing about how to impliment ideas properly and put thoughts into action.

Permalink Reply by Celph Titled on November 11, 2010 at 5:05pm
chris, thanks for all the insight, brotha. i hear u on the adapt to the times motto, i'm just doin my best to hold my ground for now. while i'm sure my team didn't completely eliminate ppl that wanted the album for free to get it, i had a very strong team staying on top of d/l links.. everywhere from private forums to blogs to russian pirate sites. for the entire first week that the album was out, it was very difficult to find a working link and if you did find one, it'd only be up for less than 12 hours or so. like i said i know it didnt stop anyone who was determined to find it for free, but it made them work a little harder for it and i definitely got the message out there that the pirating is not appreciated. even if i just get a point across, it's therapy, ya digggg... i'm not quite ready yet to abandon the selling of music in exchange for click n download referral dollars... the numbers you posted sound great in theory but the problem still lies in piracy as a whole...kids don't want to go thru ANY hassle to get their free music. they even complain about dudes using rapidshare or certain hosting sites that they don't "like"... so with the easier, quick one-two links that are out there, itd still be hard to get a huge amount of daily ppl willing to go thru the sign-up process for the referral...most kids will be like 'fuck this i'm just gonna google this shit'... but still a great idea for the future if things turn for the worst.

Permalink Reply by Heavenly Divine on November 11, 2010 at 6:00pm
Definately. I run a few sites and you're lucky if the conversion is at 10% with some of them. Most people aren't going to do it, period... it's really a numbers game, as with anything. I've generally found with email submits people aren't too precious though. (when compared with the other methods, like surveys, mobile submits and registering for some shit)

That pays at 1.50 every email adress for example. Coke or Pepsi? Who gives a fuck, and who wants a giftcard that doesn't exist lol? But it's 10 seconds at best, more conveniant than going through multiple websites looking for a link that may or may not work.

It could still be something to look at when the site has aged a little and has a stream of traffic. But it depends on the profit you're pulling in now, I don't know what your digital sales are. Probably better than i assumed... I know Vinnie Paz only sold 1000 in his first week for Season of the Assassin, which is insanely weak. I can't imagine it's improved any since then for him... so it'd be weighing up digital download weekly profit with how much you could make with the advertising method.

There's an entire industry on the internet built around profiting from other peoples shit as you're aware! And pirates(atleast the less educated ones lol, will jump through hoops). You've probably seen second rate blogspot and wordpress websites yourself(probs with your own shit on it) where the page locks and they want you to fill out some dumb mobile offer or some shit to watch a movie or download music. These people are making cash, trust me. I know a guy turned of 120k in September on a Glee website(lol wtf indeed, teenage girls, easiest demographic!). Anyway the FBI shut his website down, but he didn't own the rights so go figure.

Like you say though i probably overstated how easy it is. Ultimately you'd face the same problems as you do selling records, and that's getting a bigger fan base. More fans, more website visitors, one in the same really.

Ps. Don't sleep on that Youtube idea. I've got a new website that i haven't advertised(not properly) thats had 13,000 unique visitors in the first week, just from putting my website adress in the title of videos on my Youtube page. My vids only have a total of 1.5 million views. Your youtube vids probably have a collective of like what, 50 million views or something stupid? Only problem is there's 2,120 results for 'Celph Titled'. That's alot of PM's brother! lmao!

yo celph. big ups on this new joint. the ish is fire man. fire! The Biggest respect i have for this album... been out for 4 months and you still cant download that shit anywhere. Yo my man if i could…